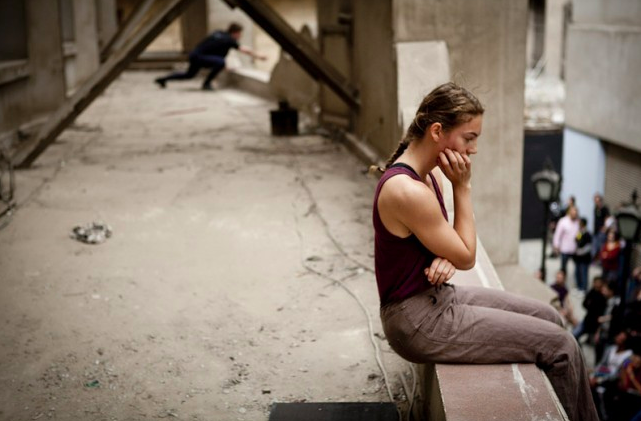 Suggested for Festivals and Outdoor Events

“This magical promenade performance led the audience on an intriguing journey through car parks and alleyways…..bringing strangers together to appreciate the cityscape through fresh eyes and delighting everyone who encountered it.” – Argus Angel Winner, Brighton Festival

In Murikamification, Erik Kaiel shares his unique style of public space performance. From the subways of Montreal, to the alleys of Africa, to the streets of Europe and North America, his performers evoke dream worlds, layering them upon ordinary urban space.

This work invites audiences to step into the daydream that unfolds before their eyes.  Creating an intensely physical performance trail, inspired by the magical stories of Haruki Murakami, the work is adapted to the local context in each new city.  In each version of Murikamification a diverse and curious audience is overwhelmed by surprising scenery in the streets of the(ir own) city.

Murikamification made it’s US debut as part of the EQT Bridge Theater Series and EQT Children’s Theater Festival in Pittsburgh, PA in May 2019.